Durability There are various levels of quality in this game. Mine is an older version but it has lasted quite well.

.Play quality This is a fun game for adults as well as children. It is a great way to teach children spelling and reading.

.Age interest The game is designated for eight years and older but the ideas below can show you ways to use it with much younger children.

Storage and portability Everything fits neatly into a small box.

This post is suggesting a cooperative way to play with young children. Opponents can’t have large differences with spelling abilities so it isn’t suitable for a four year old and a ten year old. But there’s a way even young children can enjoy it. Play my cooperative version.

How do you win?

If you can use all the tiles in the box to form words, you are Word Champions! If you don’t get them all (pretty difficult) on the board, set a goal to have fewer orphaned letters the next time you play.

Only use one rack. Let the child pull out ten letters from the bag and say their names and sounds. Together, create a word to place on the boards. Pick enough letters out of the bag to get back to ten on your rack. Keep working together.

For ideas on how to get the most out of block play,  watch the 3 minute video here.

Durability 5 stars These blocks are tough. They don’t chip or splinter over time.
Play quality 5 stars The possibilities for block play are endless. Once your child has lost interest in building, check out the nontraditional ideas on the internet.
Safety 4 stars The edges are rounded over. They are small and light. However, there have been recalls of other Melissa & Doug Imaginarium blocks with lead paint.
Age interest 5 stars From two to eight, their use changes with age but there’s always a new way to use them.
Storage and portability 5 stars The bucket holds  them all neatly. As an added bonus, there is a built in shape sorter on the lid.
Price 4 stars $40-50 at ToysRUs, $50-$60 on Amazon, $84.00 at Best Buy.
Strongly recommended. An essential toy.

Durability 5 stars Has been dropped repeatedly and still works.
Play quality 5 stars Children enjoy making the sounds happen over and over and over! They will experiment with the puzzle to figure out how the sounds are triggered and what happens when a wrong piece is used. The instrument puzzle is great for vocabulary extension.
Safety 5 stars Only for children who are past the stage of putting things in their mouths.
Age interest 5 stars Engages children from 3 to 5 years old.
Storage and portability 3 stars There is no storage box. Once the wrapping is removed, it needs to be kept in a box or bag.
Price 5 stars There is a large variety of sound puzzles to choose from depending on the child’s age and interests. The average price is $15.00, reasonable for a special toy that lasts and teaches.
Highly recommended.

This is an older version of marble works. I bought a newer one to expand the set and found out the pieces aren’t compatible. There are several cool and intricate sets out there now but I’m just going to talk about the basics.
Durability 5 stars The first set lasted an entire generation. I even brought it to school for my students to use when my son became too old for it.
Play quality 5 stars This is science, problem solving, and creative play all rolled into one. Kids  may need some direction  when starting out.
Safety 5 stars The marbles are small enough to choke a child but this isn’t  suitable for children under three anyway. Otherwise, I  haven’t encountered any issues other than marbles rolling everywhere.
Age interest 5 stars Kids from four to forty  will love this. I recommend more than one box so they can really get creative. Start with a single route to the bottom and then challenge them to  create alternate paths. How can they influence which way the marbles roll? Does the type of marble matter? Can they fix a race?
Storage and portability 4.5 With a lot of patience, you can fit all  the pieces back in the box. Reinforce the edges with tape as the cardboard is rather thin.
Price 4 stars. Price for a basic set varies from $16.00 to $37.00 on Amazon so shop around on their site and other places.
*Be warned. This sucker is a NOISY activity.
Well recommended.

Beginning today, I will be reviewing toys, games, and activities  for children every Friday. 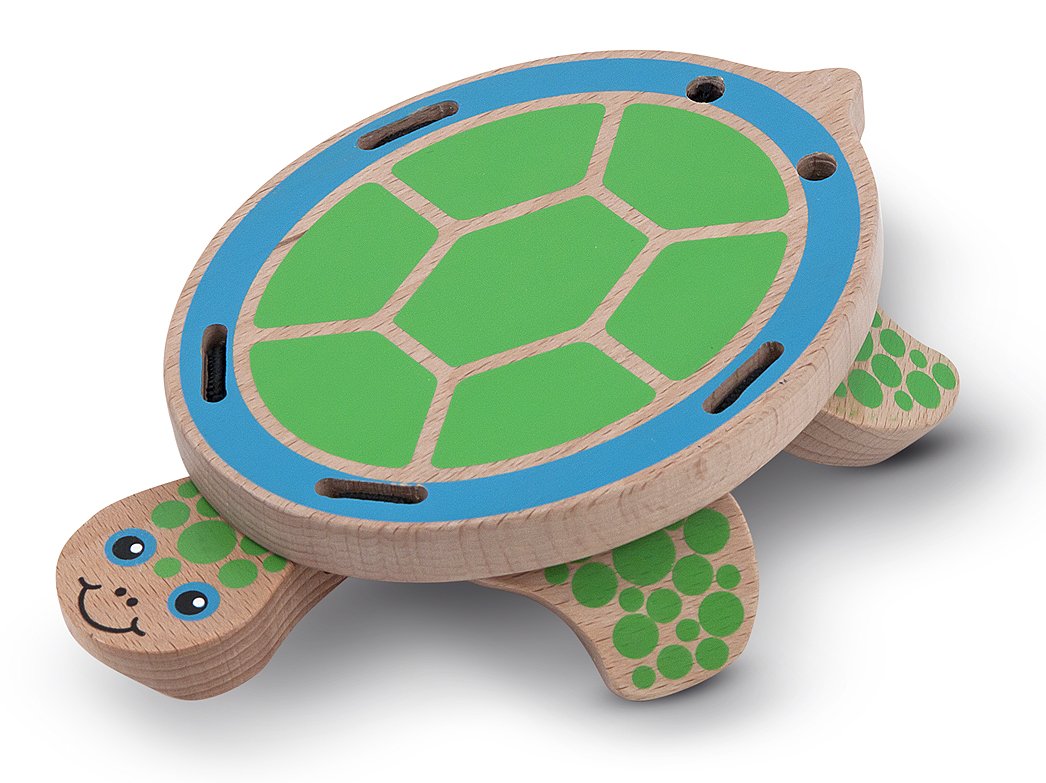 Although Melissa and Doug toys have a great reputation. I have found that their products vary in quality and usability. Happily, the peekaboo turtle is an exceptionally good toy.
Durability five stars. My granddaughter has had this toy for four years and the elastics are still as strong as ever and the paint has held up well. It easily wipes clean. It was left outside in the rain for a day and survived.
Play quality five stars. It begins with playing peekaboo as a baby. Teach the words head, body, legs, peek, hide. It builds fine motor control and finger strength in a toddler. Imaginative play for years.
Safety four stars. No sharp edges. A toddler might get a bit of a snap if the head or feet close quickly on her little finger but it would just be a small sting.
Age interest five stars. This toddler toy will extend into older ages. My four-year-old granddaughter refuses to give it away and still enjoys playing pretend with it.
Storage and portability five stars. Smooth and compact. Can fit in a large pocket.
Price five stars. Worth $10.00.
Highly recommended.
BUY LINK

Any submitted toys will be used for 1-6 months before being reviewed. I will generally be reviewing toys I’ve purchased but will also accept submissions/donations from companies and individuals. Please contact me at b.ferrante@tbaytel.net for further information.
If readers want to recommend a toy, I  might purchase it or pass on their recommendation in a post. The toy will be rated 0-5 stars for the following.
Durability Does it handle rough play without breaking? Does it peel or crack? Do the pieces come  apart? Does it shrink, warp, or tear? Does it stand the test of time?
Play quality Does it hold the child’s interest? Is it educational? Does it support positive values? Is it versatile? Does it appeal to a wide variety of children?

Safety Are there small pieces or sharp edges? Is it toxic? Does it encourage unsafe behavior? Are there specific safety measures or gear needed? Is it too loud for hearing safety? Can it cause vision damage?
Age interest Does it hold the interest for the age range advertised? Can its usage grow with the child?
Storage and portability Can it be stored in the original box? Is it portable? Can it fit in a bag or pocket? Does it need a large space?
Price Is it expensive? Does the play value and durability justify the cost?
Begins March 2, 2018.

“No wonder you can’t shut the closet door! What is all this stuff?”

This is called pre-yard sale conversation.

In spite of my lectures on the value of money, the eternity of plastic, and the bane of clutter, my son collects plastic figures. Somehow we escaped G.I. Joe but not Masters of the Universe, superheroes, army ants, wrestlers, Ghostbusters, and now Ninja Turtles.

These are billion-dollar enterprises. Whenever my son gets close to completing the collection, new figures are introduced. He couldn’t live without a mailman who dropped his pants and transformed his belly into a toothy monster mouth. I saw him looking at our letter carrier with interest.

Manufacturers understand boys. Every year or two they create a new series to whet the collector’s flagging appetite. The stores are now stocked with Dick Tracy figures and, I’ll bet, Gremlins II are not far off. How about a politician series? Each figure would transform into a useless lump.

The bizarre thing is, these toys all have the same questionable play value. Good guys versus bad guy. They only vary in powers or abilities. Does it matter whether the figure can spit, spin body parts or mutilate?

When crossing my son’s room was like entering the Temple of Doom, I offered half the money from any toys sold. Suddenly that Dusty He-man didn’t seem so precious. It was easy to take the clutter induced, “Let’s have a yard sale.”

Conversations in closets, sheds and the basement went like this:

“Whose is this?” (Demanding)

“When’s the last time you used it?” (Disgusted)

“Not very long ago.” (Muttered)

“It’s filthy and has a spider’s web!” Stronger disgust.

“Great. Then someone will buy it.” (Insistent)

“Then you’ll have fond memories.” (Decisive)

When I finished the slag pile of saleable items, we made signs. My daughter warned us that her teacher said permanent markers cause brain cells to pop.

“Open a window,” I suggested.

“We’d better do these outside,” I sighed. None of us could afford too much popping.

The usual types came to the yard sale.

The Lonely Scavengers had tentative voices and hesitated over each item. Once I showed an interest, they talked about their grandchildren (whose parents were probably tripping over plastic figures already).

The Serious Collectors looked for specific items, china or teaspoons, to complete their sets.

The Weasels got as much as they could for as little as they could any way they could. They didn’t smile and seldom conversed. They took off price tags, moved items into lower-priced boxes and offered a fifth of what was asked. One sent her tiny granddaughter, already wearing the jewellery, up to me with only half the money.

Finally, we packed it in. The leftovers were given to charity and the money was counted and divided. My son was ecstatic. He wanted to go to the mall immediately. There was one plastic ninja turtle villain he just had to buy.

Looking for a cute gift for that special child in your life. Check out the Kids Store.