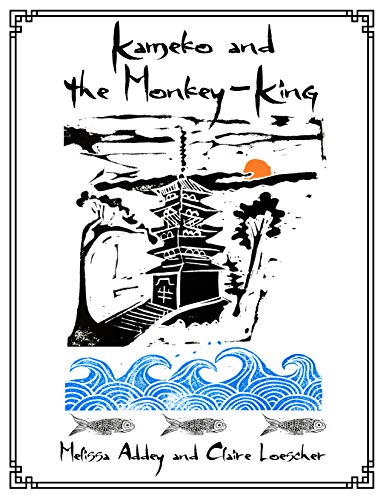 Kameko is told by the Buddha statue that in order to cure her seriously ill mother she must obtain the jewel from the Monkey-king’s crown. On her way to The Monkey-king’s Kingdom she meets and befriends several characters. They warn her not to drink, eat, or sleep in The Monkey-king’s Palace or she will wake up a monkey herself.

She pretends to go to sleep but creeps in and steals The Monkey-king’s jewel. He pursues. In spite of being helped by her new friends, the monkey regains the jewel. Kameko returns home heartbroken but the magic from the jewel has saturated her hands and her touch cures her mother. She grows up to be a renowned doctor and healer.

The story has a lyrical quality as though it is being told by an oral Storyteller of old. The print illustrations suit the story line perfectly. The illustrations seem simple at first glance but are actually quite complex for lino cuts. They are black and white with touches of red giving it an historic Japanese flavor.

Kameko’s interactions with the people she meets are positive especially when she takes time from her trip to help an elderly woman gather wood. However, as a Buddhist myself, I find the fact that her only strategy was to steal disappointing. I’m not sure if this is based on a traditional story or original, but to be cross-culturally relevant I think it needs to be updated.

The Monkey-king has a right to be enraged. We have no proof that he is actually going to bring harm to Kameko and, even so, Kameko goes there by choice. I had hoped she would use her wits to gamble and win the stone or win a challenge from the Monkey-king. Simply stealing it in the night does not comply with true Buddhist ethics. Neither  would I want a child to go away with the idea and stealing is the first and best response.