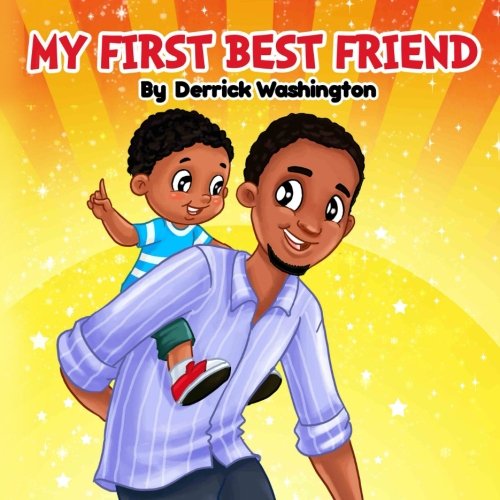 This picture book is a sweet story of a father’s unwavering love for his child. He expresses his admiration for his son’s determination and his enjoyment of his boy’s growth. Throughout the book he builds the child’s confidence and sense of adventure. They do everything together and their lives are filled with joy and affection.

Then his son takes a major step toward independence. The father confesses that sending his child to school is difficult because his son is missed. When his son says he has a new best friend named Miles, the father reminds him that he will always love him and be his first best friend. I think it is important that when a child has to negotiate the scary and unpredictable world away from home, especially the social quagmire of school, that he knows his father is always there to back him up and support him. However, I would have liked the dad to show more interest in Miles and encourage his son to make friends outside the family.

The book is written in rhyme which holds together fairly well but it isn’t really necessary, especially considering the story’s focus. The illustrations are full color, full-page, cartoon style. There is a color page and a maze the back of the book.

This would make a lovely gift for a new father or father to be.

One thought on “My First Best Friend by Derek Washington. Book review.”