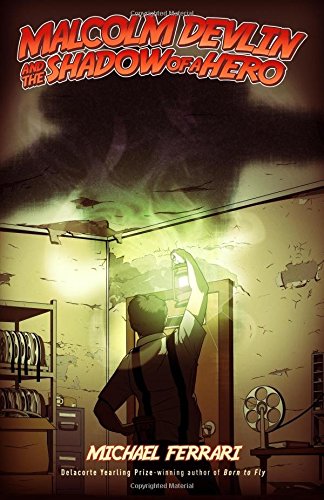 Malcolm Devlin and the Shadow of a Hero begins with a riveting and heartbreaking chapter. Malcolm and his parents are a circus family. Mom stands in the middle of a centrifuge while dad drives around her at top speed on a motorcycle. Malcolm is never afraid as he firmly believes his mother’s love is unconditional and his father is invincible. As a result, Malcolm is protected and loved completely. What happens in the first chapter completely shatters Malcolm’s belief in personal safety and security.

When Malcolm’s father is killed being a hero, we understand the title of the book and the motivation of the protagonist. The reader is quickly invested in Malcolm’s well-being and wants to know what will happen to him.

Fatherless, and living with a mother who has lost her glow, Malcolm lives in constant fear. His coping mechanism is to separate himself from society and try to be invisible to the bullies that inevitably dog his life. When his mother sets up her traveling flea market in the theatre of a small town, Malcolm is targeted by three dangerous, violent bullies. The leader of this trio is the grandson of the harsh and manipulative mayor. Malcolm seems doomed.

Just when things seem the most hopeless, in walks a mysterious gypsy woman with a magical trade. She promises it will help him live without ever being lonely or afraid, the two most dominant emotions in his life. What unfolds is humorous, touching and suspenseful.

The only time this book did not feel believable was during the fire scene but that is probably because I have been researching this topic recently for my own work.

This is the kind of book that would translate easily onto the big screen. There are laugh out loud scenes that would be even funnier to watch. Although some things are little clichéd, it doesn’t matter because the character of Malcolm is so well-rounded and lovable that we buy everything at face value. The author has a talent for atmosphere and characterisation. Readers 10 years old and up will find time flying by as they enjoy this wonderful book.

A copy of this book was generously donated by the author to my Little Free Library.