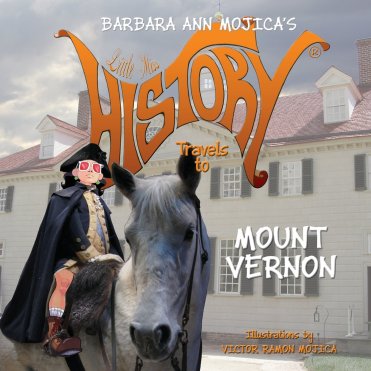 Barbara Ann Mojica is an expert on interesting sites to visit in the United States of America. In her latest book we are taken on a tour by Little Miss History through Mount Vernon. Being a Canadian, I knew absolutely nothing about this place. Barbara gives an interesting overview of George Washington’s plantation in Mount Vernon, Virginia.

On the one hand, we are given a tour of the grounds and the inside of the mansion. Several of George Washington’s rooms and gardens are shown. There is an interesting story about a key in a framed box on the wall. The key was used by the revolutionaries in France to storm the Bastille. I found it ironic, and somewhat disturbing, that a symbol of downtrodden people fighting for their freedom was hung on the wall in a plantation where slaves were used.

Last spring I had the opportunity to tour two large plantations in New Orleans. The emphasis was on the ostentation and history of the white plantation owners. What intrigued me the most was the snippets we were given on the slaves’ lives. I was very pleased to see that Mojica did not undervalue the story of these brutalized people. She mentions in the book that George Washington did not allow “harsh treatment of his slaves”. I guess he judged this on a continuum. Owning a person, selling them at will, controlling every minute of their every day, working them from dusk til dawn, is pretty harsh on its own.

By the second page of the book, we are made aware of the use of slaves to keep the grounds pristine. They used scythes to keep the Bowling Green usable by the free and wealthy. Martha Washington managed the kitchen with a hired person and several slaves who would’ve prepared many foods they were not allowed to eat. The quarters of 85 slaves were built out of sight of the main house. Doesn’t that speak volumes? I was pleased to see that, whenever possible, Mojica named the slaves and their specific duties. She explained the conditions under which they lived and their meager possessions. She related how long and hard they worked under a man who believed it was the government’s responsibility to end slavery and did not free his own slaves until his death wherein he was given a memorial. Even after their deaths, however, slaves were treated as chattel and buried in unmarked graves.

This book lends itself well to discussion. One of the most disappointing traits of humans is the ability to compartmentalize and avoid ownership of the results of their behavior. We can have a man who does not believe in slavery owning slaves. We can have an animal lover who hunts. We can have a psychologist who manipulates his wife. Accountability, responsibility, truth, all become evasive when humans can rationalize their behavior. It is especially damaging when leaders, such as presidents, can say one thing and do another.

I’m not sure if it was Mojica’s intention to raise these issues. Her books are for history lovers and those who like to symbolically visit interesting locales while sitting in a comfy chair. However, for me this book was more than that. An excellent addition to her wonderful series.